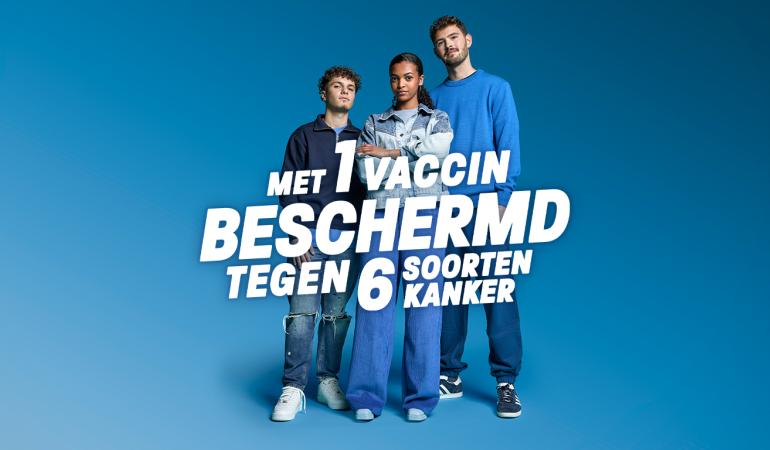 In early 2023, 1.3 million young adults will receive an invitation to get vaccinated against the human papillomavirus (HPV). This group comprises around 900,000 men and 400,000 women between the ages of 19 and 27. Around half of all women in this age category already had a vaccination earlier in life. Research has shown that young people are not or barely familiar with the virus. One in five believe they are likely to become infected with HPV, whereas four in five actually do become infected. HPV can cause cancer in the mouth, throat, penis, anus, vagina, labia and cervix. The vaccine protects against these six kinds of cancer. In 2022, it was offered to boys as well as girls for the first time, and with great success: more than 50% of boys have now had their first vaccination against HPV. In addition to the group of young adults, more than 800,000 teenagers1  under the age of 18 will also receive the invitation, in a repeat of a practice adopted last year.

Young adults are not or barely familiar with HPV and the significant chance of infection with the virus. Last summer, RIVM Rijksinstituut voor Volksgezondheid en Milieu (Rijksinstituut voor Volksgezondheid en Milieu) conducted a survey among them to find out what information needs they had and what the most effective channels would be to spread this information. The outcome was a neutral and light-hearted message spread through channels already used by young adults. The information campaign, conducted through a variety of social media channels, focuses on an HPV knowledge quiz that allows young adults to make an informed decision on HPV vaccination.

Scheduling an appointment themselves

Starting in week 2, young adults born between 1 January 1996 and 31 December 2003 who want to protect themselves against HPV can schedule an appointment with the Municipal Public Health Service (GGD Gemeentelijke/gewestelijke gezondheidsdienst (Gemeentelijke/gewestelijke gezondheidsdienst)) themselves at www.hpvafspraak.nl. This special website is part of the campaign developed by RIVM and GGD GHOR Geneeskundige Hulpverleningsorganisatie in de Regio (Geneeskundige Hulpverleningsorganisatie in de Regio) Nederland. For thorough, long-term protection, they will need two vaccinations six months apart. The HPV vaccination scheme is part of the National Immunisation Programme, which is coordinated by RIVM. Vaccination is free of charge for both teenagers and young adults aged 26 and under.

The one-off expansion of the HPV vaccination scheme in 2022 and 2023 follows an advisory report published by the Health Council of the Netherlands and is in line with the target of the World Health Organization (WHO) to achieve 90% vaccination coverage among girls in order to eliminate cervical cancer. In the Netherlands, full vaccination coverage among girls has climbed gradually to 70%. As for boys aged between 9 and 18, half of whom received their first invitation early last year, more than 50% have now had their first vaccination against HPV.

HPV is a highly contagious and common virus that infects eight in ten people. The body is usually able to get rid of the virus on its own, but it can remain present in cells for a long time. This can lead to a precancerous abnormality or full cancer, even after many years. There are more than one hundred types of HPV, some of which pose a high risk of cancer. HPV types 16 and 18 are the most dangerous. Together, they cause around 70% of all cervical cancer cases and the majority of all other HPV-related cancer cases. The vaccine offered as part of the National Immunisation Programme protects against these two types. Moreover, vaccination also helps to protect the entire population by creating herd immunity, which makes it harder for the virus to spread. In the Netherlands, an estimated 1,500 people a year develop cancer following an HPV infection. This group comprises around 1,100 women and around 400 men.